The poet with the golden gun... 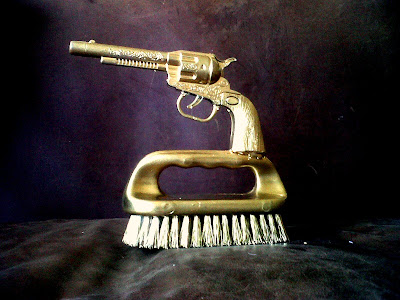 Last night's Bang Said The Gun went down with a small crowd of lyrical gun-slingers waging a war of metaphor and a killing spree of simile.
The limelight was shared by some of the capital's hottest emerging stand-up poets. Angry Sam dropped a hot 10 minute set, touching on the hot topics of the moment with a skilful blend of critique and comedy. Anna Le brought some swagger to her performance building towards an epic 'Jimi' piece - very sweet and honest performance from a young, talented lyricist.
Other notables were Kate Modern's sexy diatribes about debauched liaisons and a nameless slammers pop at Facebook abusers. However, the slam could only have one winner, and as you can see from my photo at the top of the page, the trophy came home to North Weezy making it a 2 in 2 average on the slam circuit - BANGBANG indeed.
If you want to see what all the fuss is about, come and see me drop a 10minute set next Thursday, where alongside myself, Chris 'Ventriloquist' Redmond and the sassy Selena Godden will be making the free entry seem very cheap.
Thanks to Dan for hosting a top night and to all the slammer - who got murked - Bbbrrraaappp!
Posted by curious at 02:14