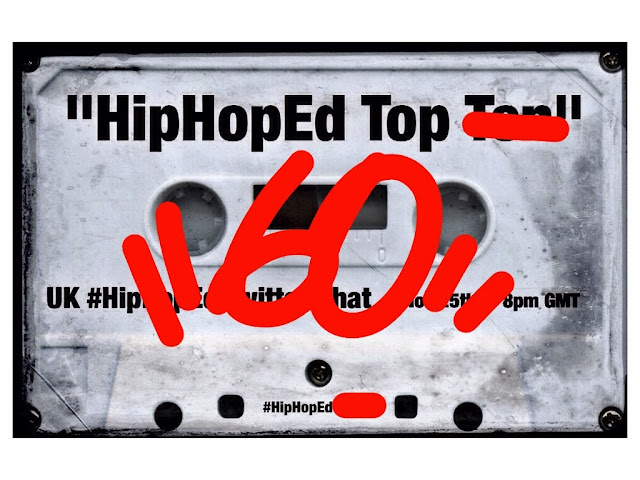 Last week the UK #HipHopEd Twitter Chat took on the ridiculous task of compiling a Top Ten list of UKHH tracks to use in teaching. After much suggestion, advocation and championing, what we got was NOT a Top Ten! There was such a wide range of contexts, purposes and subject areas that tunes were suggested for that trying to qualify any decision over a place in or out of the Top Ten would have been impossible to reconcile; let alone which order the final ten should appear in! So, what we have got is a UK HipHopEd Top 60 UKHH tracks to use in education, in no particular order. Well, nearly true...actually, the list is ordered by artists depending on how many of their tracks were submitted for the Top Ten. So, if there is a winner, it is held by the first 2 artists on the list. Both artists received 4 submissions for different tracks, from different chatters. And that all means that your winners are...

Dizzee Rascal - I Luv U

Akala - Fire In The Booth

Ms Dynamite - Put Him Out

Ruthless Rap Assassins - And it Wasn't a Dream

Lowkey - Let Me Live My Life

Krispy 3 - Destroy All The Stereotypes

The Streets - A Grand Don't Come For Free

Other artists who were mentioned non-specifically:

*Props to Dizzee and Roots Manuva for leading the way with their UK #HipHopEd bangers!!
peaCe
Posted by curious at 13:35 No comments: