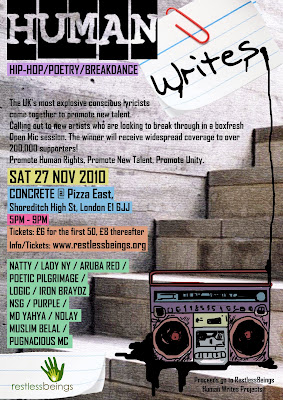 This is an event I am taking part in on Saturday in Bethnal Green. The charity works with marginalised communities suffering human rights abuses and the event is aimed at raising awareness of these communities struggles as well as the work of Restless Beings in support of them.
Its £8 on the door and there is a big line up...represent.
Posted by curious at 15:50 No comments:

They say:
Skream, Benga and Artwork (collectively Magnetic Man) perform 'Perfect Stranger' with vocals from Katy B at our Maida Vegas studios.
I say:
I can't get enough of Magnetic Man at the moment and Katy B is rapidly becoming my second favourite UK female vocalist (after Gudren Eden). I love the maturity that comes out of this return to 90's rave. I feel this track captures the optimism and collectivism that characterised that scene, set against a backdrop of social upheaval and a burgeoning multi-cultural youth who needed an out, Special.
Posted by curious at 02:51 No comments: 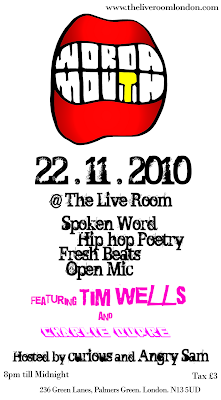 WORDAMOUTH Mondays start here. A little bit of Monday madness can do wonders for the soul - honest. Your support is always appreciated...peaCe
Posted by curious at 08:42 No comments:

This one is going to be fun. We're relaxing the vibes and putting a bit more funk into the WORDAMOUTH format. The mic will be open for those that cannot resist and the host turns dj as I take care of the sounds alongside a fine selection of djs. There will be performances on the night from Captain of the Rant, Paul Case, and a few surprises too. So come and see new year in early with the WORDAMOUTH family. peaCe
Posted by curious at 17:40 No comments:

It's a strange one this, cos, aside from the slight reduction in corniness and the undoubtedly sicker raps and beats (by Dilla), Ason Jones, isn't too far removed from Puff's ode to B.I.G. (and Sting one day soon too, please). Now the debate's open over the appropriateness of commercially released 'personal' messages. I mean, Puff could afford a hell of a lot of grief counselling with that Missing You, money!
What's not up for debate is the loss to hiphop that ODB's untimely death caused. If not for his bars at that time, certainly for his character, personality and controversy. ODB was hiphop made flesh, warts, crack-pipes and all. Its probably fair to say that his best work was well done by the time he passed, but, his death touched a lot of people, and maybe that justifies a public tribute in itself. O.D.B.J.D.R.I.P.
Posted by curious at 14:11 No comments:

Wordamouth takes over The Live Room where last month's Wordplay left off. Last month saw 4i2i Collective rip through a tongue-twisting set, while the open mic had a wicked turn out and a high standard. This month Wordamouth plays host to east end gent and poet, Tim Wells. Tim has been captivating audiences for more than two decades with a blend of story-telling and lyricism presented with the candour of a man who has seen the things he speaks about - real talk, fam!!
It's our first night since the name change and your support will be greatly appreciated.
UPDATE: ALSO FEATURING CHARLIE DUPRE
Also coming: 29th December - Wordamouth New Year Hold Up. More details soon. peaCe
Posted by curious at 14:13 No comments: