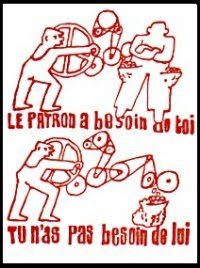 Spoken Word Poetry for the benefit of workers rights. Come and get aware as well as entertained by a host of London's hottest talent.
I managed to sneak on the bill for this one thanks to The Ruby Kid.
Come see we go haaard!
Da management say:

Following the jolly-good-time-had-by-all at the first Beats, Rhymes & Picket Lines event - where the mic was blessed by London's Captain of the Rant, Bristol's Clayton Blizzard, and Loki and Skribbo from legendary Glasgow crew The Being, we're back to serve up another slice. The formula is very simple; independent hip hop + radical politics = a better way to spend your Saturday night than stuck at home waiting for Match of the Day to come on.

So grab your nicest New Era fitted, throw on your backpack and get down to Cross Kings (five minutes walk up York Way from King's Cross station) on Saturday 3 April at 7:30pm.
Door charge is a mere £6 (or £4 if you're low-paid, a student or on t'dole).