The Mask and the Moustache 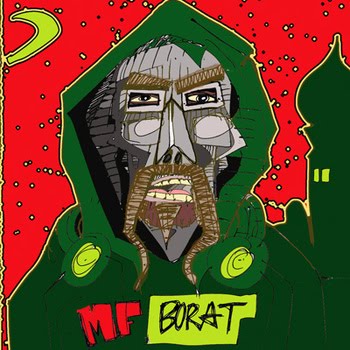 They Say:
In 2006, during a stint out west to promote his then new movie, Sacha Cohen, (aka Borat) met Daniel Dumile, better known as Zev Love X, or MF DOOM. Their blazing freestyle ciphers and mutual love of Purple Kush led to an impromptu recording of Doom’s ‘My Favorite Ladies’ verses (see Herbalisers’ Something Wicked…album) over a beat Borat had made back in ’05 with Kulki Boolchek, a Khazak producer. Later that year Doom ventured east, and recorded three more gems with Cohen at the castle of Rudolf II in Prague, renowned for its stone acoustics. DigDug bought the master off a based-out gypsy in East Oakland and the rest is history!
**Please FREELY DOWNLOAD THESE GEMS**, as they have been labeled ‘Degenerate Music’ by the Putin administration and the whole album is banned in the greater East. Censorship will never extinguish true heat!
I Say:
I just had to post this cos it's late at night and I need some evidence that I didn't dream it all up. MF Borat - f@#King genius.
Posted by curious at 16:56